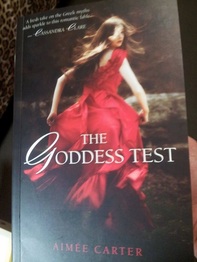 I truly hope that you are all fond of Greek mythology, because as I mentioned in my previous post, I am slightly obsessed. The Goddess Test is the first book in a series of four and I read it originally back in January. However it took me a little while to acquire the funds to buy the rest. But alas, I went without food for the week (joking, kinda) and I am now ready to go!

Before though, I wanted to read the first book again. Normally when it hasn't been too long between them, I won't bother rereading, but the book is quite an easy read and I thought 'the hell with it, why not?' Here I am two days later.

The story is about Katherine Winters, better known as Kate who moves to Eden with her terminally ill mother. She meets a few of the locals but isn't planning on sticking around when her mother passes. However, one night in the deep dark forest, some heckers shiznick which will have you stopping and rereading multiple times happens and Kate struggles to comprehend it with the help of her new friends Ava and James. Pretty much, Henry (her mysterious saviour) tells her that he would like for her to become his Persephone (the chick responsible for the season change who was 'Hades' wife for six months of the year).  Kate obviously checks him as crazy and kindly declines his offer, but what would you know... Kate is soon in the running to become Queen of the Underworld, Henry's wife and Immortal with only a bunch of 'tests' standing in her way. But does she truly want it and Henry? I guess you'll have to read the series and find out. Lalalave this book and cannot wait to read the rest, stay tuned!! :D

Rate: 8/10
Recommended If: You like a modern twist on myths
Favourite Quote: "Not ten feet away from us stood Ava."
Made Me Giggle: "I need to---change," I said dumbly, clutching my dress to my front.
"I won't look."
He settled back in my bed and opened his book once more, making it clear he wasn't going to leave anytime soon. 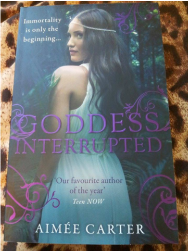 Finished this book on the 12th. Yepp, pretty easy read plus I couldn't put it down.

Now, I liked this book, I really did. It was exciting and engaging and enlightening and all those other E words. However, I was a tad disappointed. I felt that it jumped straight into the drama rather than easing into it. Honestly, I would have enjoyed the first half, if not the whole book being about Kate learning the ins and outs of the Underworld and doing her job. But nope, drama drama drama. Pretty much, what happened is, Kate has to recruit the help of Persephone (yepp, Henry's ex wife who he is still so heartbreakingly in love with) to help them keep Cronus (the super bad Titan) from escaping Tartarus (bad bad prison). Some twists and turns along the way, with what Kate finds to be the ultimate betrayal by someone she loves. The ending is quite a cliffhanger and hence why I am already half way through book three. You won't have to wait long for the next review guys!! 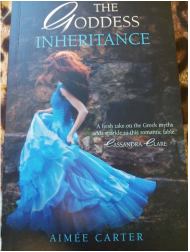 I do not even know where to start... With the basics I guess.

Kate and everyone is back in the third installment fighting Cronus and his evil sidekick in order to save the universe as well as a surprise bundle of joy. Kate and Henry battle on with their relationship even though she was captured for nearly a year and Cronus is now creepily obsessed with her. They both seem to have a death wish and speaking of death... Carter kills off a few characters... INCLUDING MY FAVOURITE!!!! I am seriously so traumatized and angry. Seriously, I raved onto all my friends about it last night when I finished. My blood is STILL boiling! SO unnecessary. Anyhow, I will try to stop ranting now. There are some big shocks, most of which I saw coming. A quality book, but like the sequel, not as good as the first. Here is hoping that the fourth installment will give me a look at Henry and Kate's future together; as I like to live the happy ending, not just know they got it. 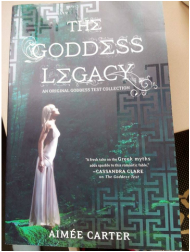 Okay, so you know how I was raving last post about how I was hoping that I would get to live Kate and Henry's happy ever after in the fourth and final book? Well I didn't. And for one very specific reason. That reason is... It is a novella!!! Yes, I know! The third book is actually the final in the series and this book has Point Of Views (POVs) from a variety of characters over the eons. I was so devastated when I started reading it because I hadn't taken my time with the previous book as I would normally do with the finale.

Once I got over the shock, I did enjoy the book. It had the POVs of Hera/Calliope, Aphrodite/Ava, Persephone, Hermes/James and Hades/Henry in that order. Starting with the end of the titan/god war and ending just before Kate meets Henry. I guess it is a prequel of sorts and it sorts out a few things mentioned in the other books and helps us to understand every character's path. Quite good overall.